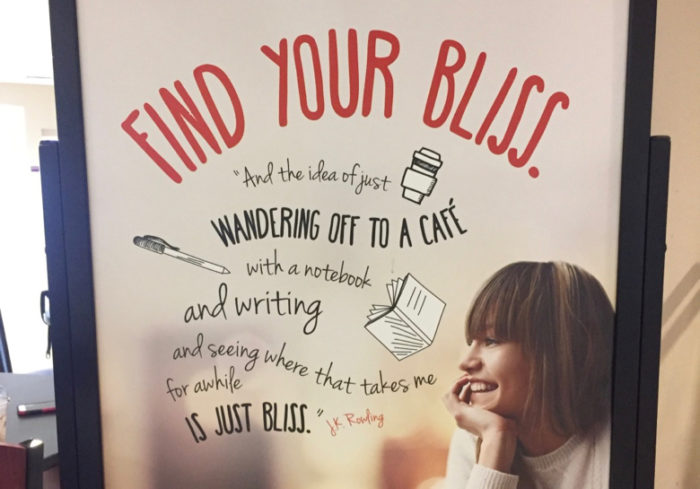 A coffee shop at my university has a poster on display next to the cream and sugar.

“Find your bliss,” it reads in tall, red letters. Then, a quote from literary megastar J.K. Rowling: “And the idea of just wandering off to a cafe with a notebook and writing and seeing where that takes me for awhile is just bliss.”

Something about this poster rubs me the wrong way.

It’s not the quote. Wandering off to a cafe to do some writing in a notebook is a great way to spend some time, and I have certainly been known to do just that; in fact (and I am not making this up), I started writing this post in a notebook while sitting in a coffee shop. It was a pretty blissful experience.

So Rowling’s right, and the quote itself isn’t the problem. I think what bothers me is how it’s used—the subtle implication that if you carry around a Moleskine and dart in and out of coffee shops, you too can be a great writer like J.K. Rowling (who did do a lot of her early writing in cafes, mostly because walking to the cafe helped put her baby to sleep).

The idea that great writing comes out of casual coffeeshop doodling is a romantic idea (and a great way to sell espresso) but it’s rarely true. J.K. Rowling was a single mother when she wrote Harry Potter, eking out a page at time. She was anything but casual in her approach. She was intentional, determined, and committed to her work despite plenty of roadblocks. And although it’s a little long, I’d rather see this J.K. Rowling quote on a coffee shop poster:

Be ruthless about protecting writing days, i.e., do not cave in to endless requests to have “essential” and “long overdue” meetings on those days. The funny thing is that, although writing has been my actual job for several years now, I still seem to have to fight for time in which to do it.

If you have creative ambitions of any kind, guard your time and take your work as seriously as you can.

And don’t worry if the process isn’t always blissful.