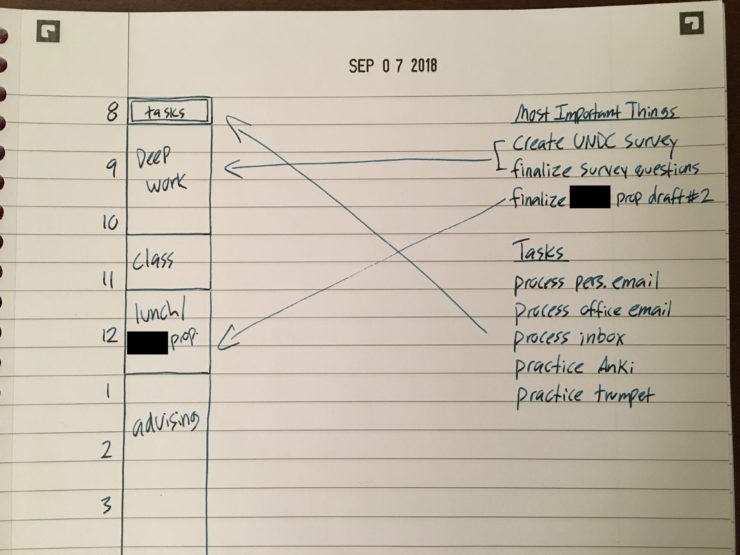 In researching and writing about time management for the last couple of years, I’ve explored multiple approaches, but I’ve gradually come to advocate one approach above all others. It’s called time blocking, and it’s no exaggeration to say that it can change your working life. In the two years I’ve been using time blocking, I estimate that my productivity has roughly doubled. That’s the kind of efficiency gain you don’t find every day!

In this article, I’ll define time blocking, examine why it’s so effective, and explain how to use it.

What is time blocking?

Time blocking is simply scheduling your to-do list. In a time blocked schedule, every task is assigned to a time slot and every minute has a job. This zero-based approach stands in stark contrast to common practices like running your day out of your email inbox, doing only what’s most urgent, or repeatedly tackling the easiest item on your to-do list (all of which I’ve been guilty of).

It’s not a new idea, as you can imagine. The concept of scheduling your entire day goes back at least to Benjamin Franklin (who practiced a form of time blocking), and probably much further than that. I was introduced to time blocking through Cal Newport’s instant classic Deep Work: Rules for Focused Success in a Distracted World, and I base my approach on the author’s own.

Time blocking is nothing more than making a budget for your time, and like a financial budget, it allows you to extract the maximum value from your resources. Next, let’s talk about why it’s so effective.

What’s so great about time blocking?

Time blocking forces you to confront reality. It’s not just you: human beings are flat-out bad at estimating how long things will take. This tendency is so universal that it’s got a name: the planning fallacy. To make matters worse, we also tend to assume that we’ll feel like doing our hardest work later (even though we don’t feel like it right now). The result? We put off complex, important tasks and don’t leave enough time to do them well.

In addition to quickly teaching you how long your tasks really take, time blocking builds a bulwark against procrastination by forcing you to schedule your most important work instead of pushing it off to a misty future when you’ll “feel like” doing it. Psychology tells us that simply deciding when and where you’ll do something significantly increases the chances you’ll follow through.

Time blocking helps you avoid over-committing. When you operate only from a to-do list, it’s easy to say yes to new requests. When you have whole days and weeks planned out, though, it’s much easier to remember that time is a zero-sum game. Saying yes to one thing means saying no to something else.

Time blocking leverages the power of deadlines. Deadlines force productivity, and time blocking involves a never-ending series of tiny deadlines. While this might sound incredibly stressful, the opposite is actually true: by setting and achieving tiny goals (e.g. “finish project proposal: 1-3 pm:”), you enjoy the motivation generated by these goals and the self-satisfaction of accomplishing them without experiencing the panic that huge deadlines bring.

How to start time blocking

The general idea is quite simple:

For more specific directions, I’ll direct you to previous posts. This post covers how to time block a day, and this one covers time blocking on a weekly scale. There are many great time blocking posts on other blogs, too, especially Cal Newport’s.

Productivity is more about following principles than clinging to specific techniques, and there’s rarely a best way to do anything. Still, certain methods tend to work well because they compensate for typical human weaknesses, and because time blocking does so, it’s a highly effective time management approach for most people.

Time is the ultimate nonrenewable resource. Since it’s the one thing you can’t get more of, it’s worth managing your time as well as you possibly can.