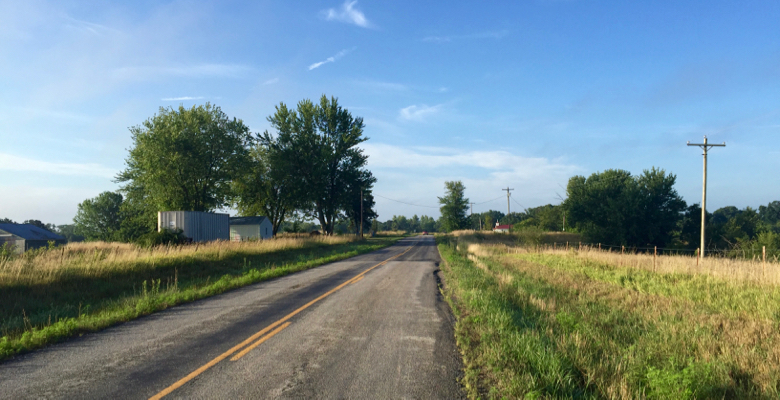 Okay, I’m cheating. This is Kirksville, not St. Louis. And there’s no roadkill in the picture (I figured you’d be okay with that part, at least).[/caption]

I’m finishing up a weeklong family “staycation” at my parents’ place in St. Louis, and I’ve spent much of that time on a bicycle.

New surroundings create fresh perspective, and riding unfamiliar roads has made me notice something I’d stopped noticing on my usual cycling routes back home:

Boy, there sure is a lot of roadkill.

If a 3-day old opossum seems gross as you drive by with the windows up in your air-conditioned vehicle, try cycling past one on a hot August day. You’ll experience levels of detail you never imagined. It’s a whole ‘nother level of disgusting, trust me. And don’t get me started on deer.

All this roadkill reminded me of my roadkill policy, which I came up with several years ago after a particularly grisly ride.

Don’t look at the roadkill.

Why not? It doesn’t do any good. There’s nothing you can do to help the roadkill, and causing yourself a little bit of suffering by getting a good long look doesn’t help you, either.

Lately, I’ve been experimenting with applying the roadkill policy to other types of information.

If it won’t help me or someone else to know about something unpleasant, I choose not to know it.

For me, this mostly means spending less time on Google News.

It may seem pollyannaish, but we are under no obligation to be aware of every awful thing that transpires somewhere around the globe.

Now, a natural reaction to this sentiment is “How callous! Are we supposed to bury our heads in the sand?” I think this reaction comes from a good place: the desire to participate fully in society and not turn our backs on the suffering of others. But allow me to extend the argument ad absurdum:

If there were an app that notified you every time someone was murdered anywhere on planet Earth, would you want it on your phone?

If there’s nothing I can do to alleviate the suffering of others (imagine a news article entitled Nine People Murdered in Cleveland!), I’m experimenting with choosing not to know.